A few weeks ago, I went to pick up my husband from Amsterdam Airport Schiphol. As we passed the exit for Delft, I was awestruck. The birthplace of Johannes Vermeer, creator of Girl With a Pearl Earring, The Art of Painting, and The Little Street, known the world over as the Painter of Light, and one of the greatest masters of all time, is only an hour’s drive from our house! I began scheming up a little outing in the fall, when my two small and constant companions would be happily back at school. When my husband expressed interest in joining the pilgrimage, we decided to make it a family trip. 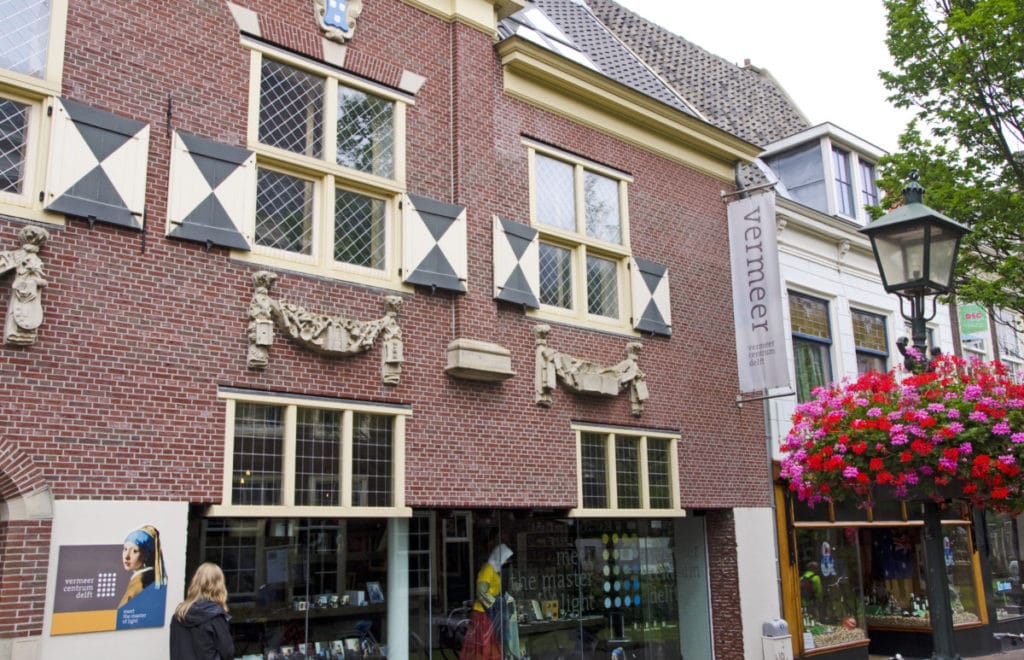 The first stop on our visit was the Vermeer Centrum Delft. Located at the historical spot of the former St. Lucas Guild, where Vermeer was head of the painters, it now houses reproductions of the master’s complete works, historical information about his life and times, and an experimental studio. It is run completely by volunteers, and their enthusiasm for the work is clear.

Tip: Every Sunday at 10:30 AM there is a free English tour in the Vermeer Centrum Delft.

When we paid our admission, the cashier handed us free audio guides in the language of our choosing. We didn’t have to ask, she offered. She also asked our children’s ages and handed them each a clipboard with age-appropriate treasure hunts, and the promise of a prize at the end of our visit. Again, we didn’t have to ask, she offered! You can’t imagine how excited my two little art aficionados were when they entered that exhibit… And me, too. I felt encouraged that, this time, I might even have a chance to use the audio guide.

The tour starts with a short  informational video about Vermeer’s life in the 17th century. I confess, the kids couldn’t sit still long enough to finish it. We only caught the (very important!) bit about the 1654 explosion that destroyed much of the city.

On 12 October 1654, around 90,000 pounds of gunpowder exploded in Delft’s gunpowder depot… Thanks to the fundraising efforts of neighbouring districts, the city was soon able to start rebuilding itself. 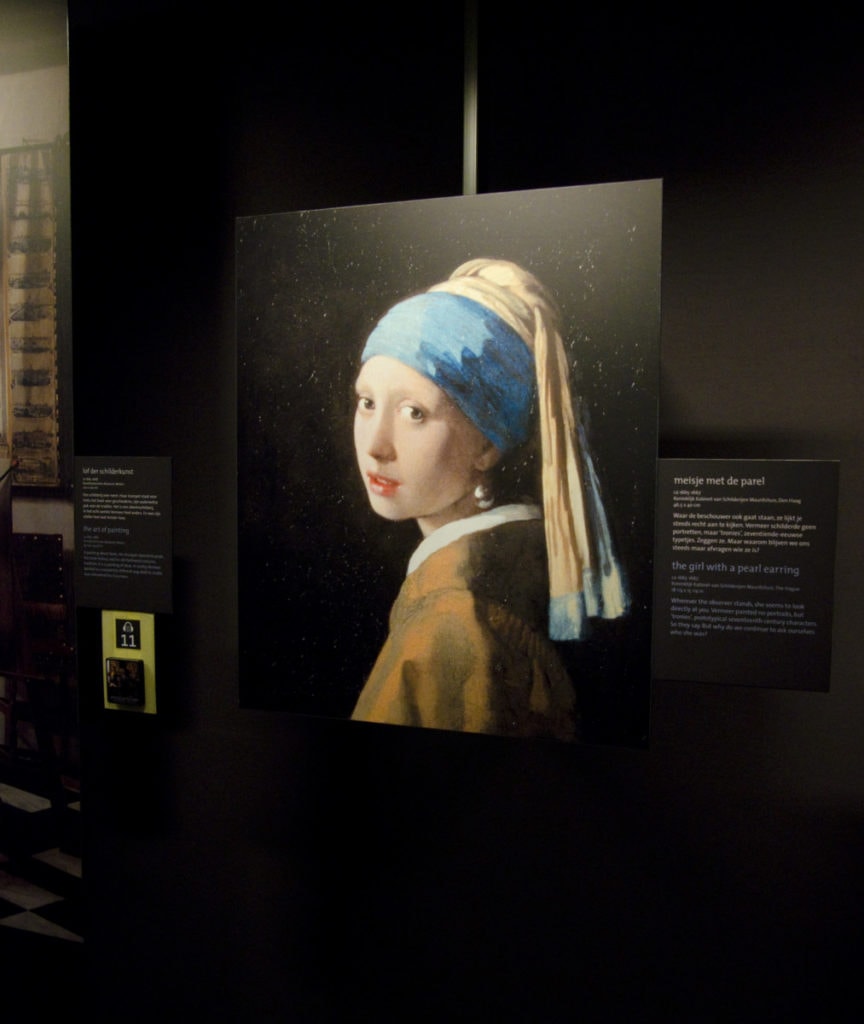 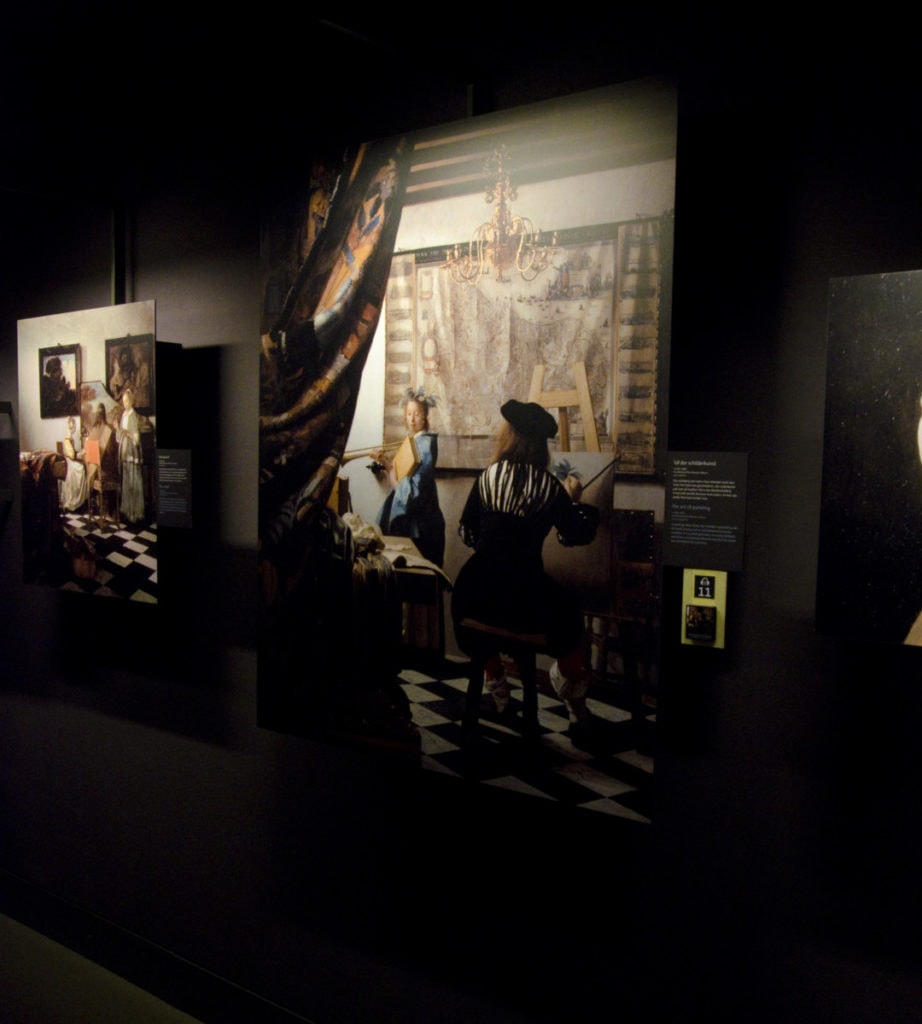 Around the corner begin the reproductions of Vermeer’s works, in chronological order, and in their original sizes. Of course, the reproductions don’t compare to seeing the actual paintings in person, but they provide an excellent overview and full description of each. 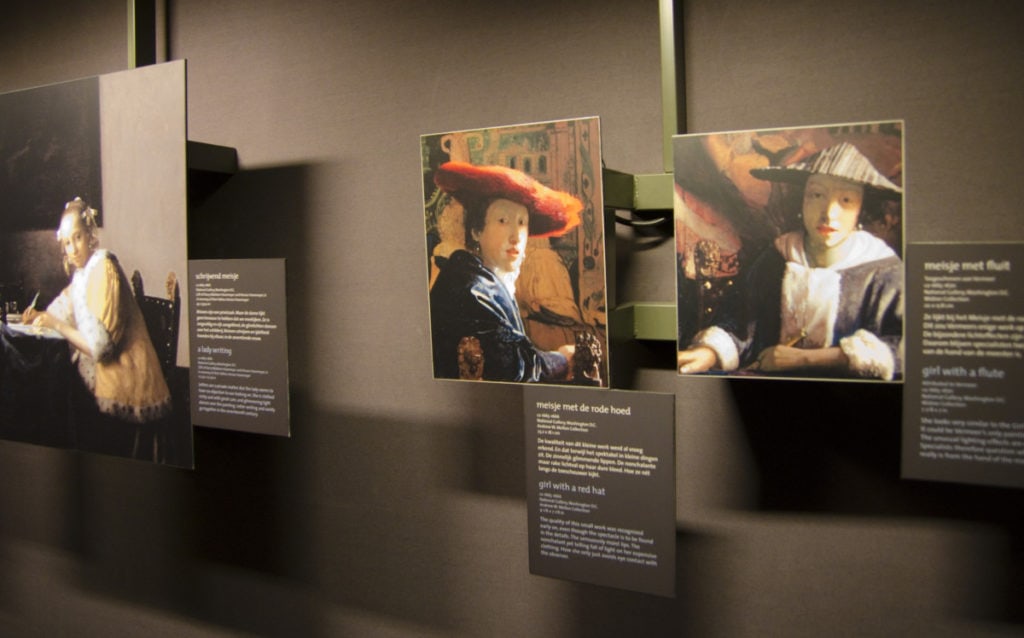 …and a real appreciation for the level of detail achieved in the many smaller works. The Girl with a Red Hat is tiny! 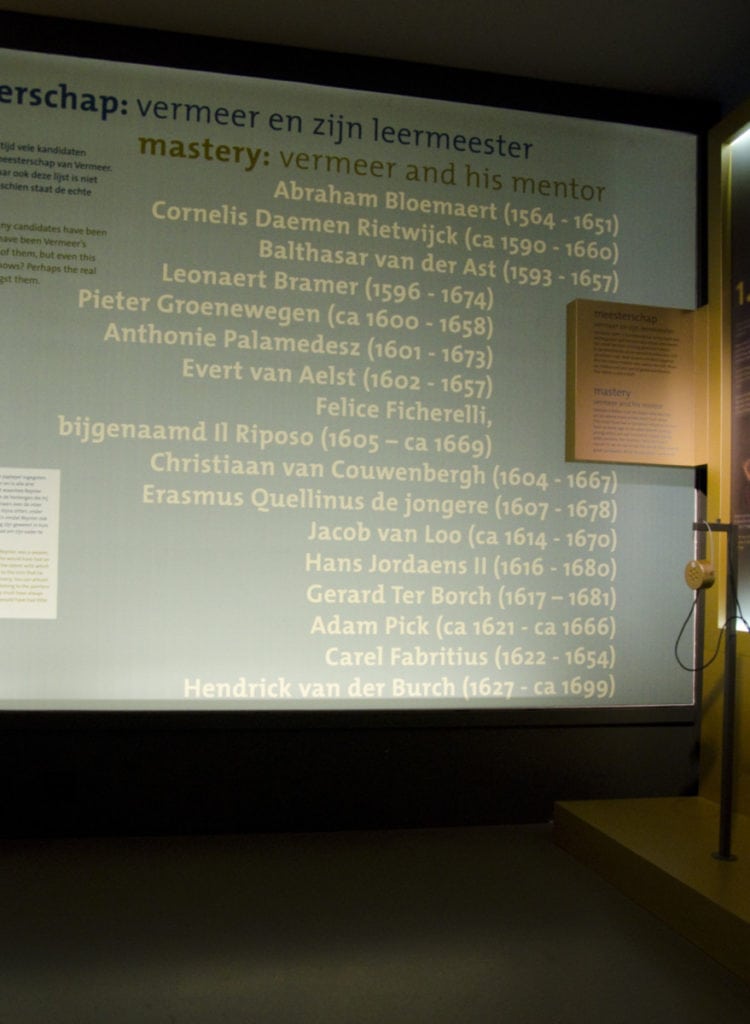 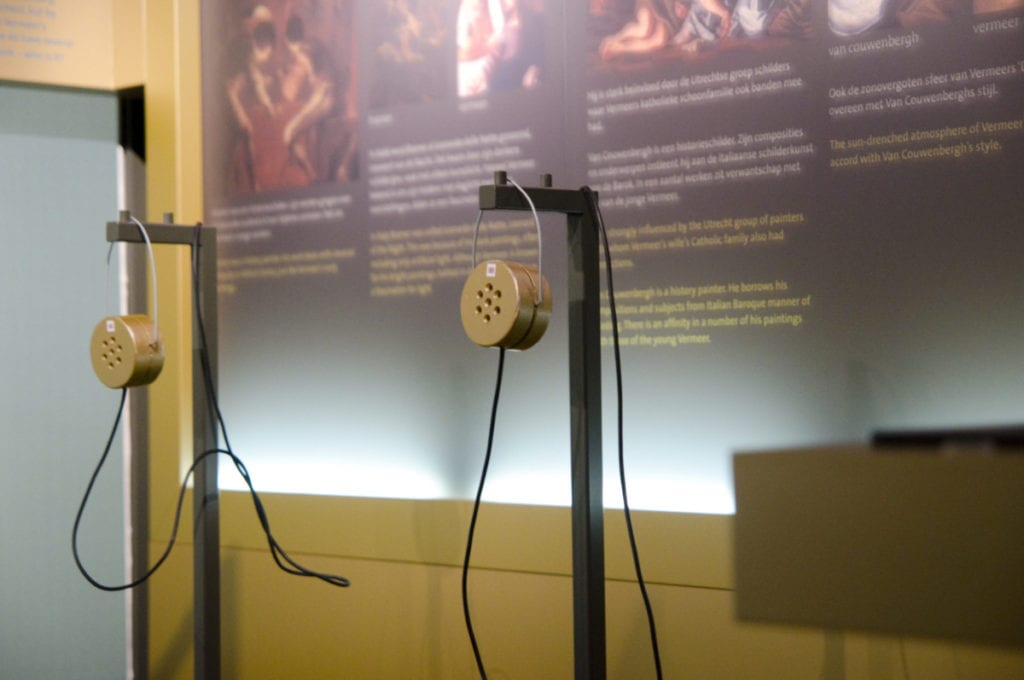 On the opposite side of the walls is a wealth of information. Much of Vermeer’s training remains a mystery, and his mentor is unknown, but the center provides a list of possibilities. 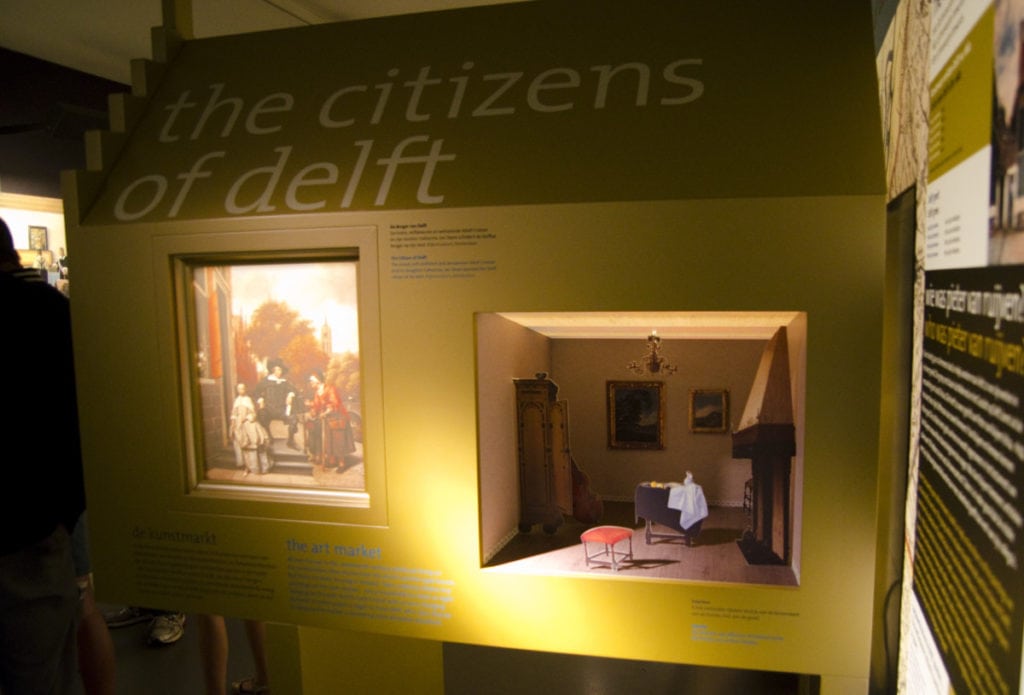 There is explanation about typical Dutch households of the 1600s, and Vermeer’s patrons. As a result of the Protestant Reformation, much of the patronage at the time was private. Painters would sell their work at local markets, and families used their wall decor as a demonstration of their tastes, intelligence, and interests – not much unlike today. 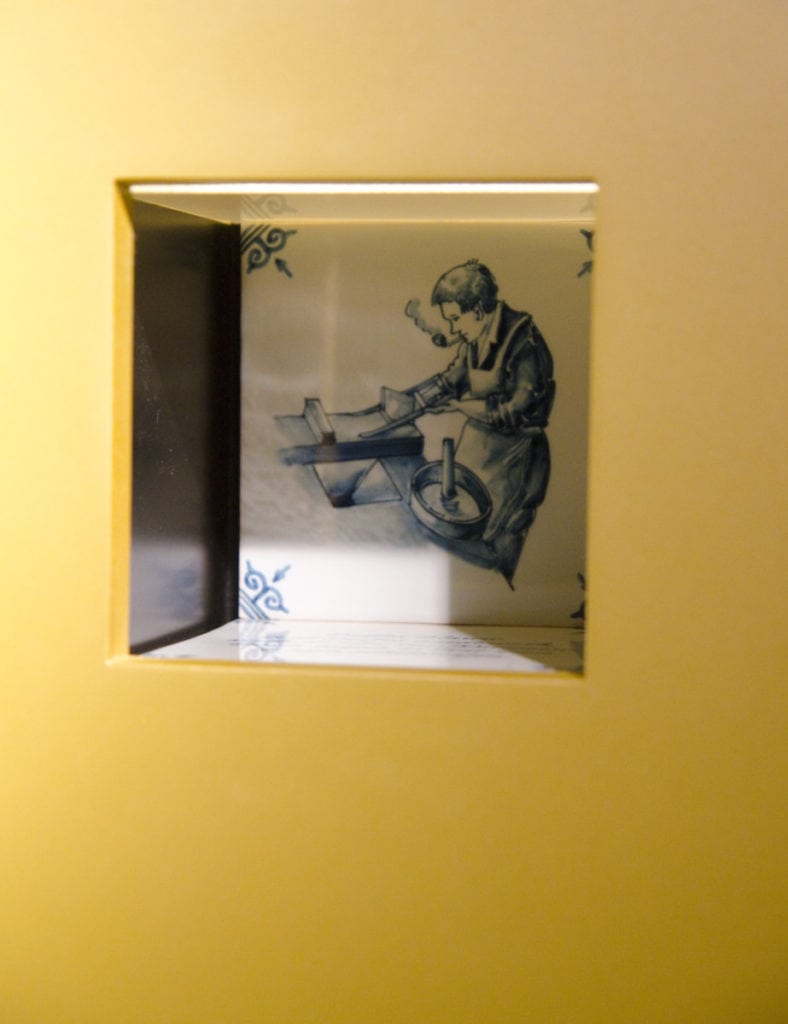 The famous blue and white earthenware, now known as Delftware, came into production in 1602. Between 1600 and 1800 Delft was one of the most important ceramics producers in Europe, and Delftware was extremely popular. 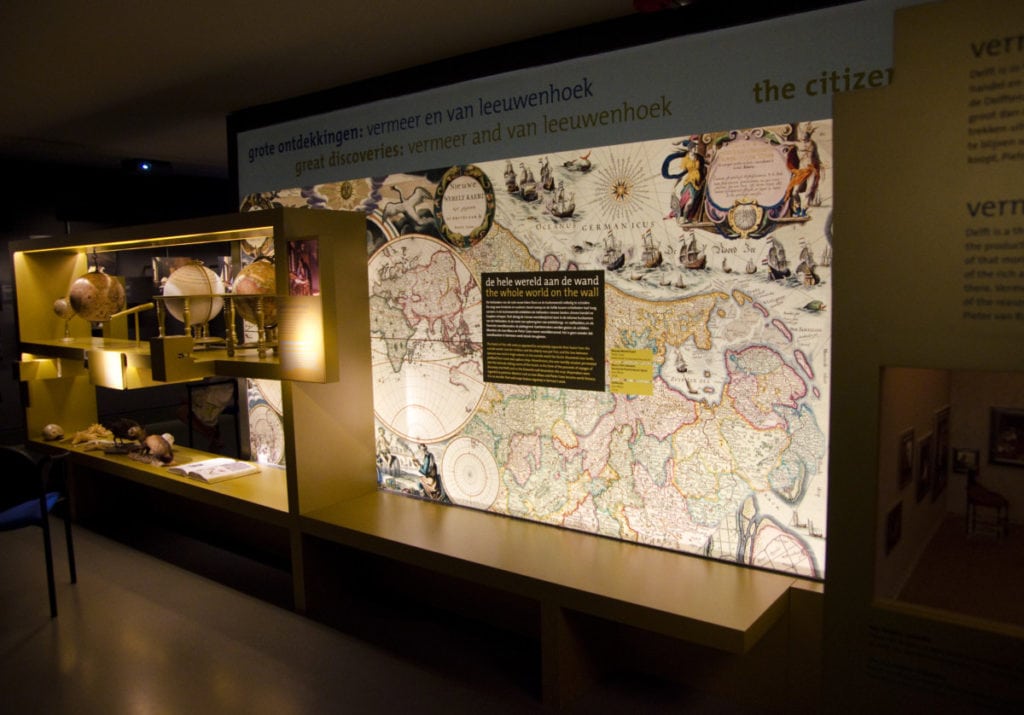 The center also displays examples of the intellectual and worldly influences that were prominent at the time. Although Dutch citizens focused mostly on their lives inside the home, they brought the outside world into their sitting rooms by displaying large maps on the walls. Maps were highly regarded as works of art in the 17th century. It is no wonder that we see renditions appearing in the backgrounds of several Vermeer paintings.

Antonie Philips van Leeuwenhoek, inventor of the microscope and commonly known as “the Father of Microbiology”, was a contemporary resident of Delft, born in the same year as Vermeer. It has been suggested that he is the man portrayed in two of Vermeer’s paintings of the late 1660s, The Astronomer and The Geographer. In any case, the two men were at least acquainted, as Van Leeuwenhoek acted as the executor of Vermeer’s will after his death in 1675. 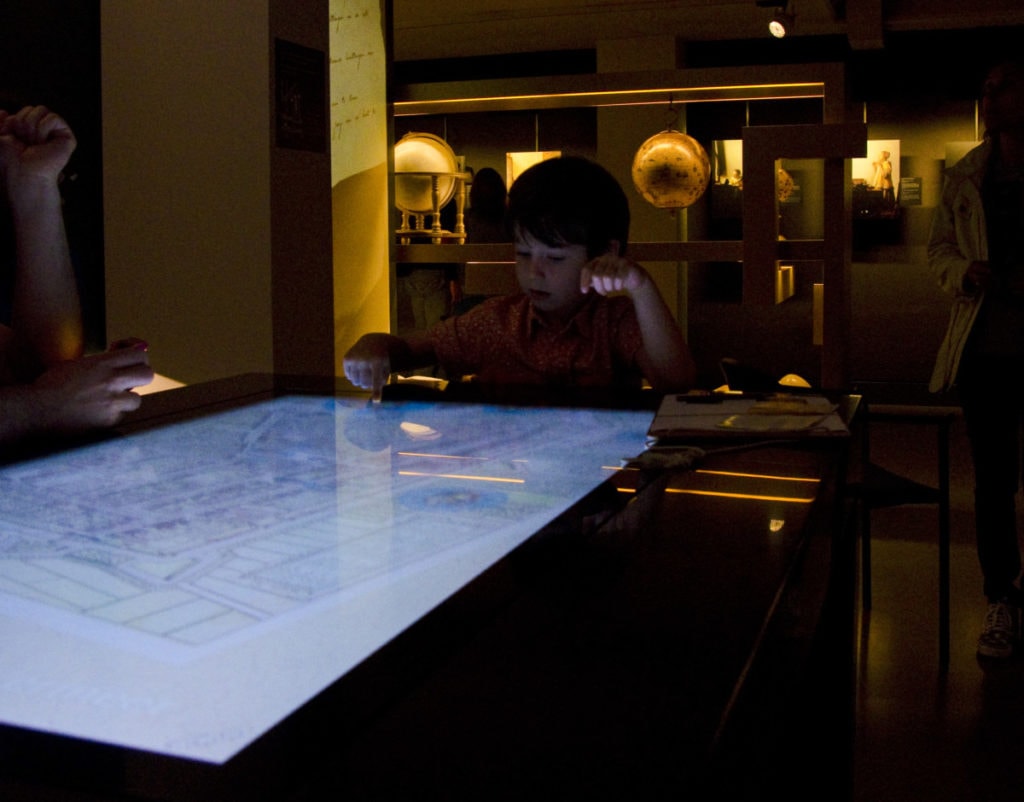 The first floor finished with an interactive map of Delft highlighting interesting locations. This was a savior as I finished my audio guide, since the kids had finished filling in the blanks of their treasure hunts and were growing anxious. 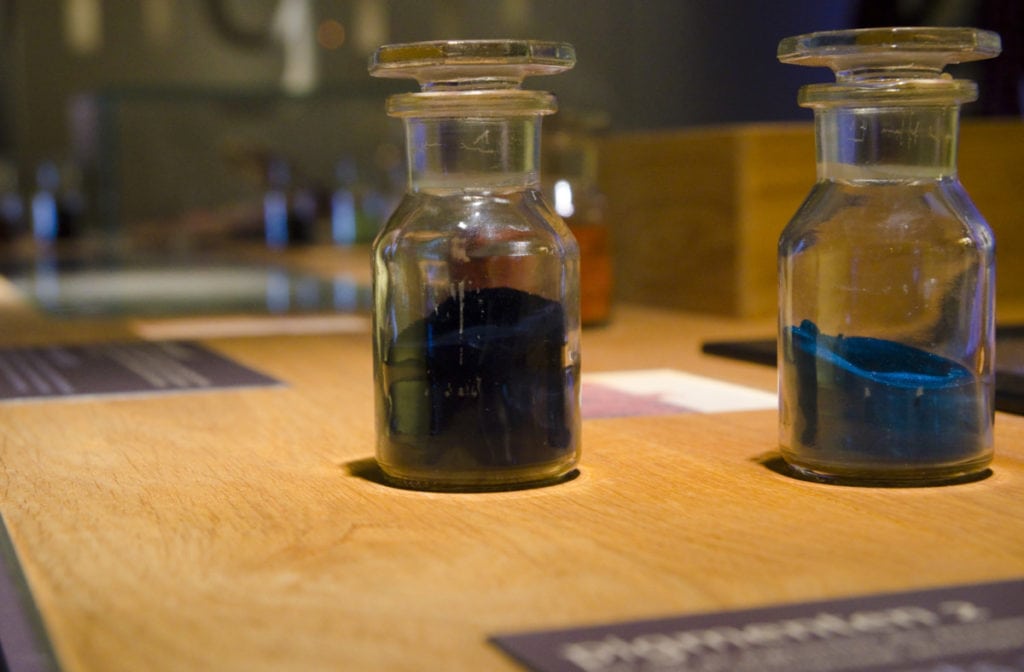 Upstairs is the atelier. My favorite part was the display of pigments and tools used by the old master. These were the days when ground pigments were purchased at the local apothecary, and mixed into linseed (or another carrier) oil by the artist or his assistants. The colors were vibrant, and so beautiful. 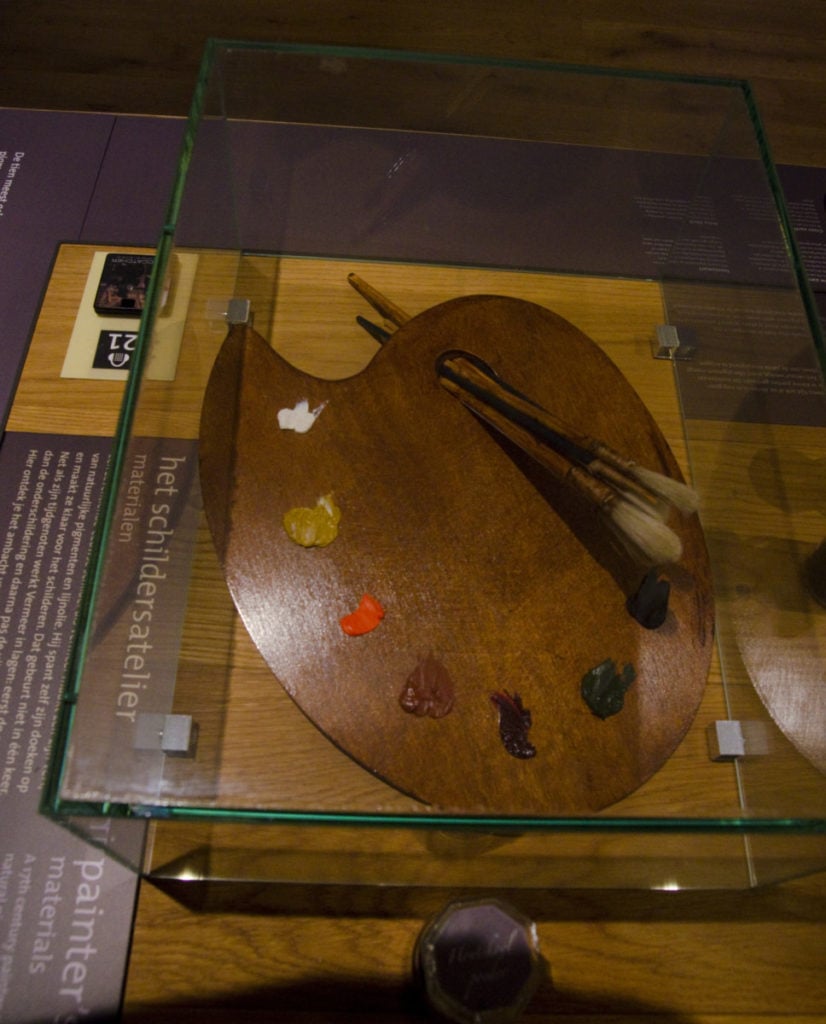 Vermeer most frequently used the following colors on his palette:

The center includes a description of each pigment, its derivatives, and how the artist used it in his work. 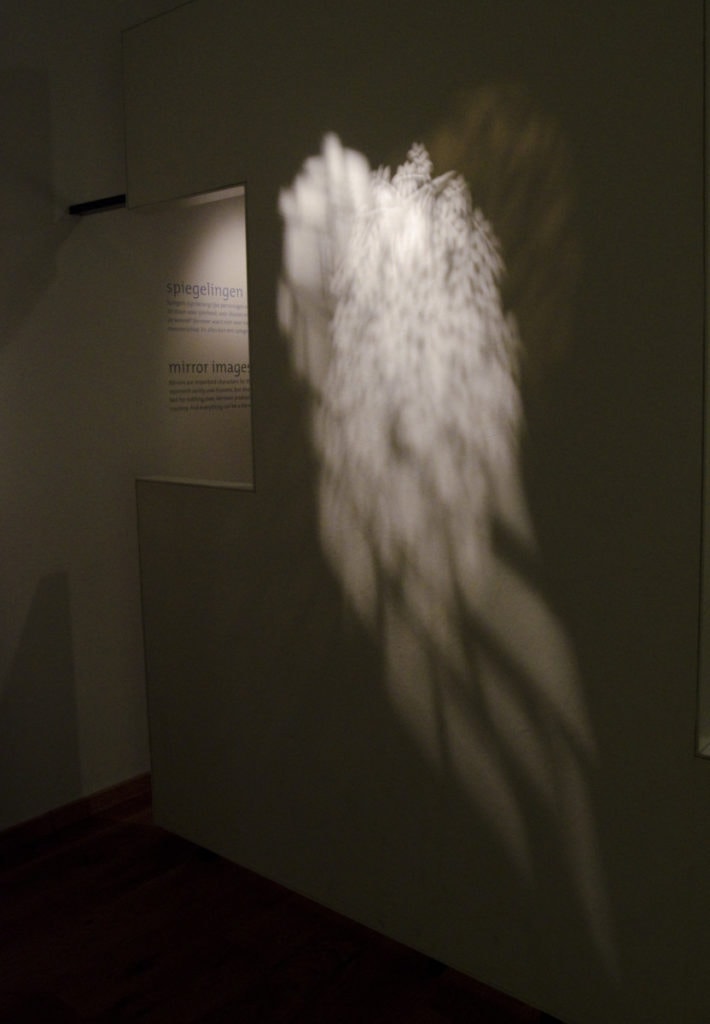 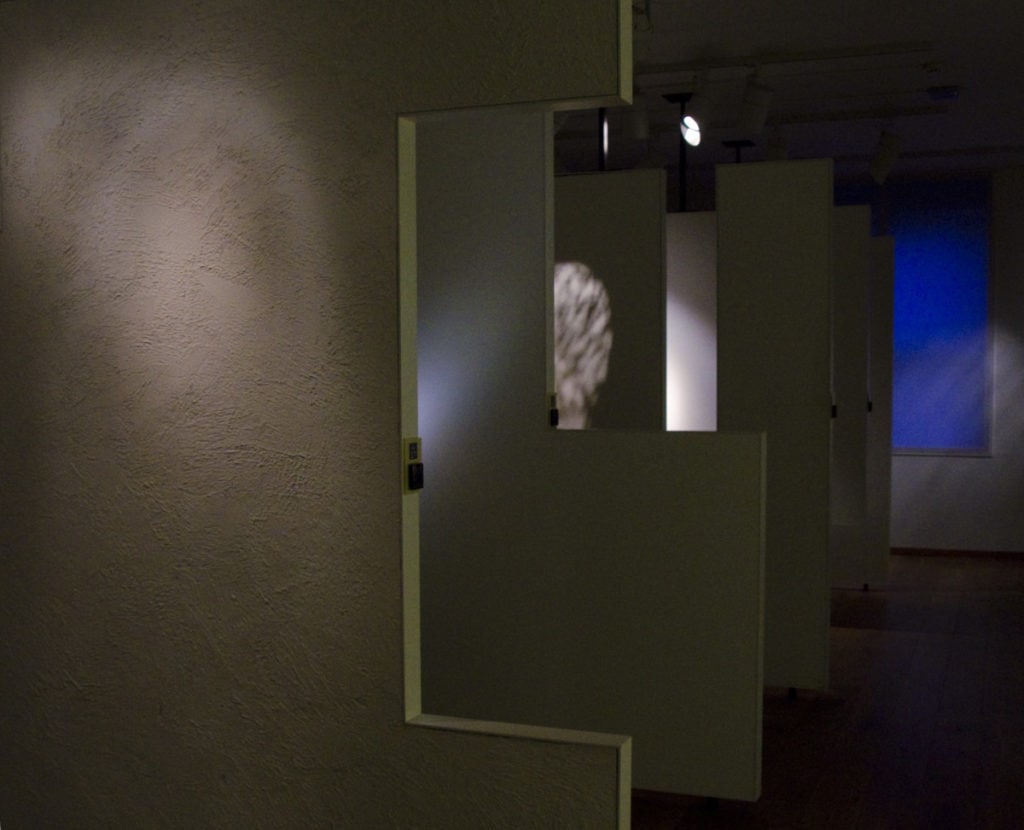 There is a light studio, giving real life examples of highlights, texture, reflection, and color used in Vermeer’s painting. His manipulation of these properties was taken to a level of mastery, which is why he is now known as “The Painter of Light”. 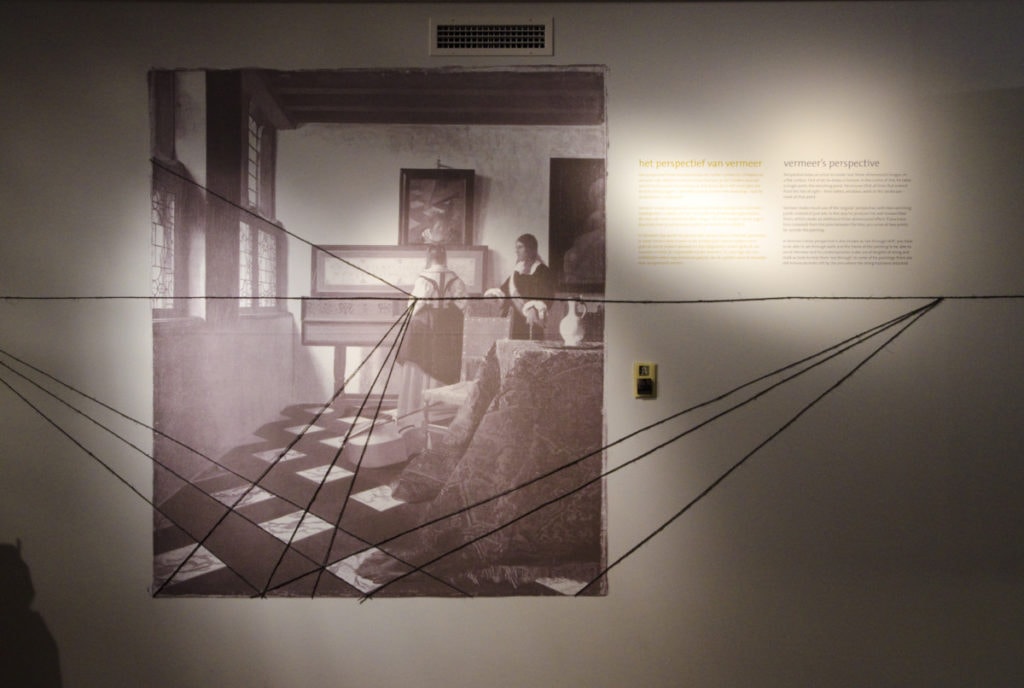 The kids enjoyed the exhibits of perspective, 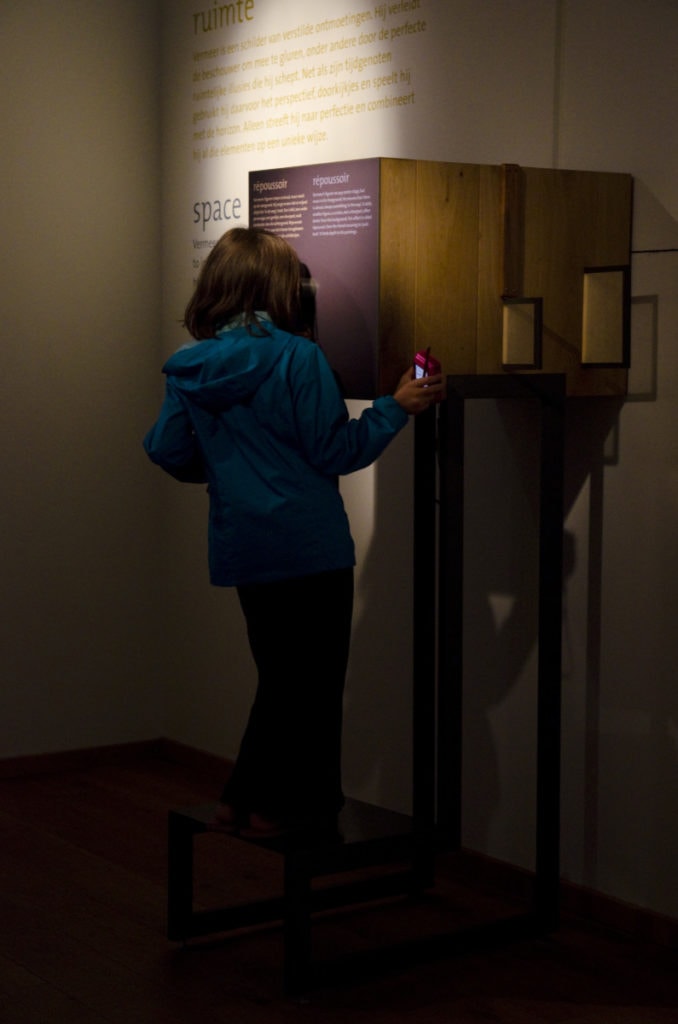 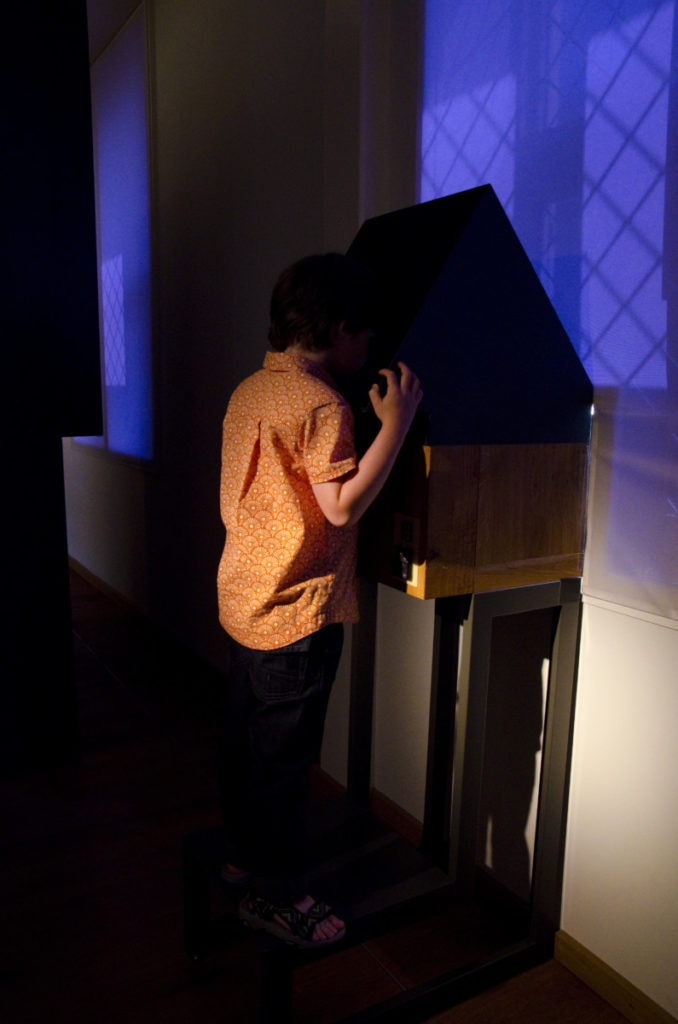 and the camera obscura.

There was much more to discover here, but at this point we were all hungry, and the small humans were ready for a change of scene. We returned our audio guides and cashed in the treasure hunts for free postcards of the kids’ favorite artworks. My daughter chose The Art of Painting and my son View of Delft. Bravo, little ones. We also left armed with two Vermeer coloring pages.

After a typical Dutch meal in one of the cafés on the Market Square (Grote Markt), we took a little stroll around the city. We didn’t follow a tour, since we were all a bit tired and didn’t want to torture the kids too much longer. If you have the chance, though, here are a few recommendations for more formal routes:

We started by searching for the location of The Little Street. No traces of Vermeer’s vista remains, but Frans Grijzenhout, Professor of Art History at the University of Amsterdam, has used seventeenth-century records to suggest that Vlamingstraat 40 and 42 mark the spot. Read more about his research here. The painting was brought on loan from the Rijksmuseum as the centerpiece of a special exhibit in the Museum Prinsenhof Delft as a celebration of these recent discoveries…. an exhibit that we missed by just a few short weeks. 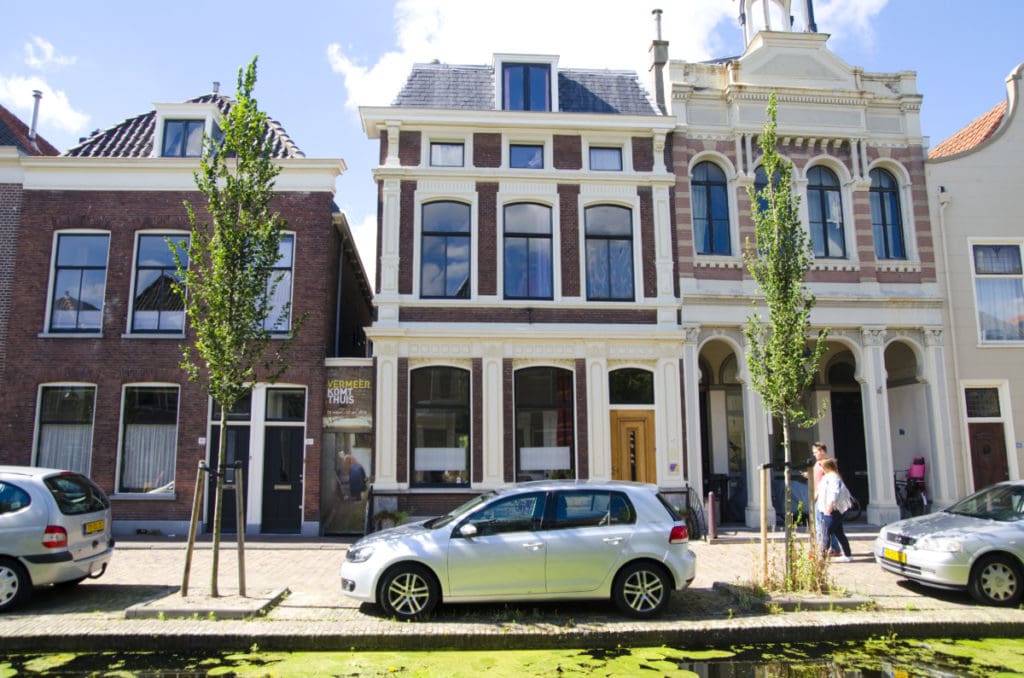 This is the modern view of the little street that was immortalized by the hand of Johannes Vermeer. It is a short walk from the Market Square (Grote Markt). What I find interesting is that the artist would choose to exclude the canal. 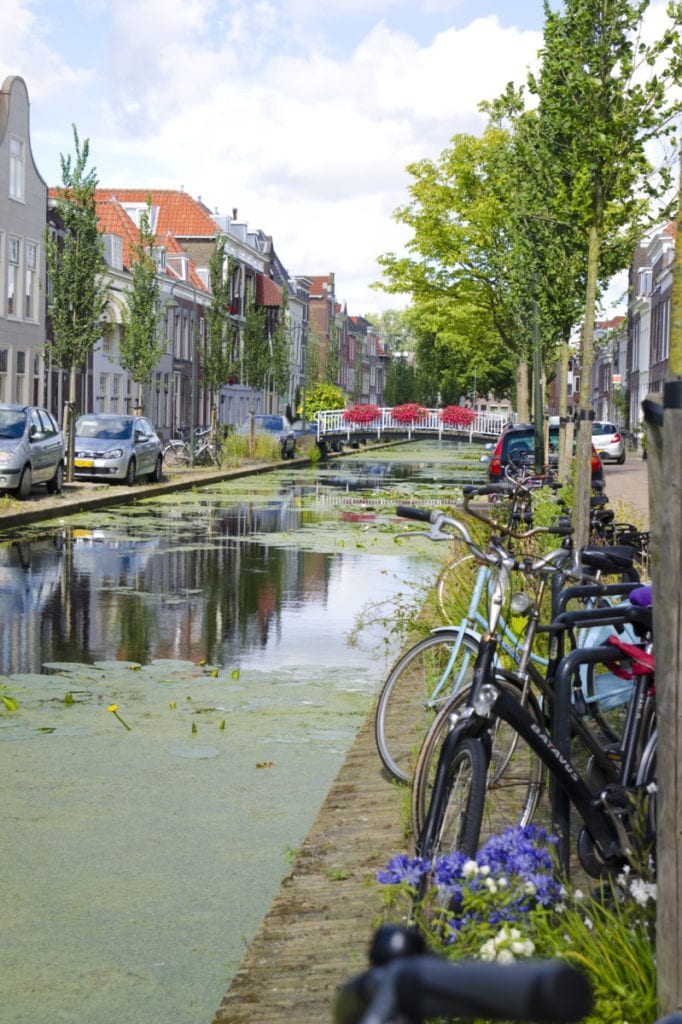 As you can see from this photograph, the canal is a rather prominent feature of Vlamingstraat. On the other hand, the Vermeer Centrum Delft‘s exhibit explains that The Little Street may not have depicted an actual place at all. Many structural elements of the painting suggest that it portrays a figment of the artist’s imagination. The window shutters, for example, could not be opened without blocking the doors. 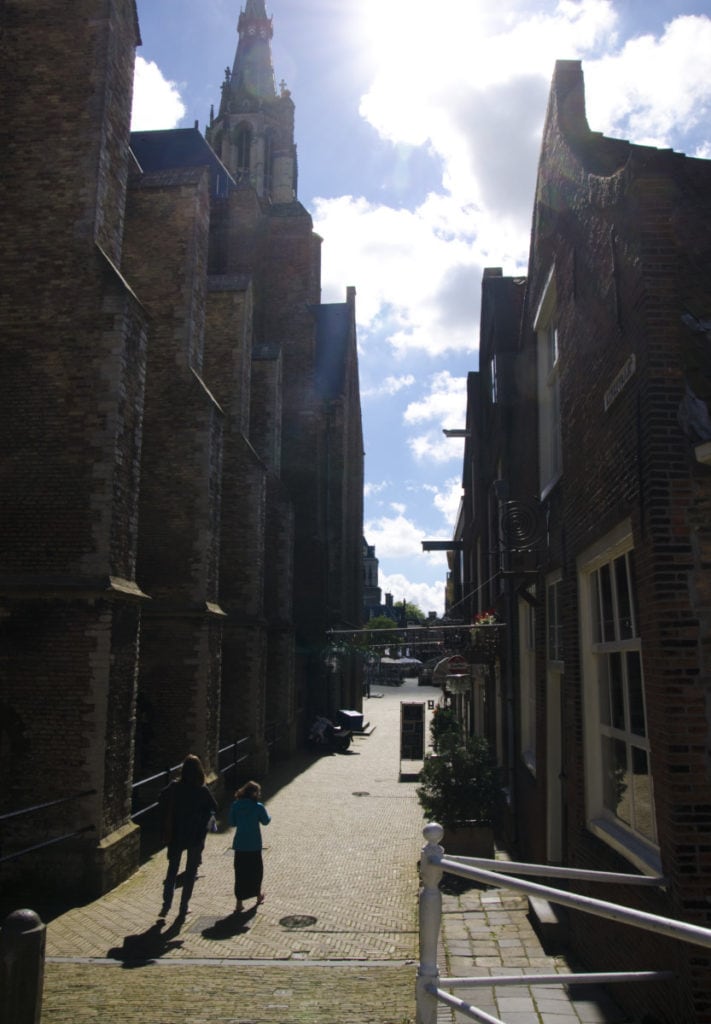 Just around the corner is the Protestant New Church (Nieuwe Kerk) alley leading to the Market Square. Vermeer was baptised in this church. 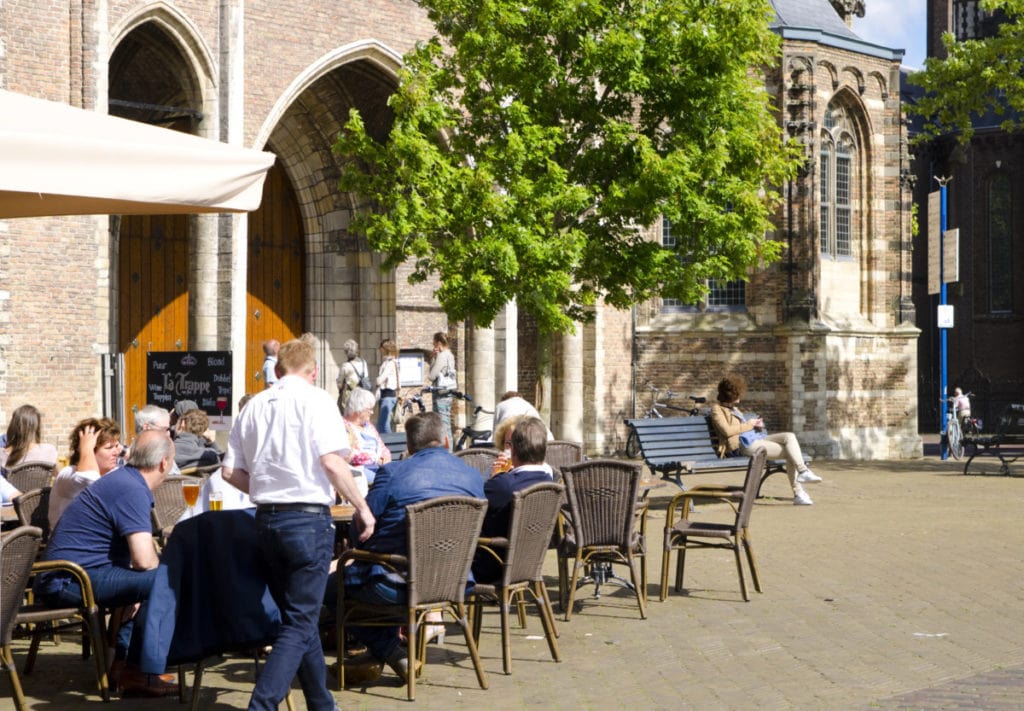 The 1654 Delft Thunderclap (gunpowder explosion) dislocated the New Church (Nieuwe Kerk)‘s walls and collapsed many of its roofs and windows during Vermeer’s lifetime. He would have witnessed the restoration to its current state, excepting the spire, which was destroyed by a lightning strike in the late 19th century and subsequently rebuilt. Otherwise, the church remains much the same as it was. 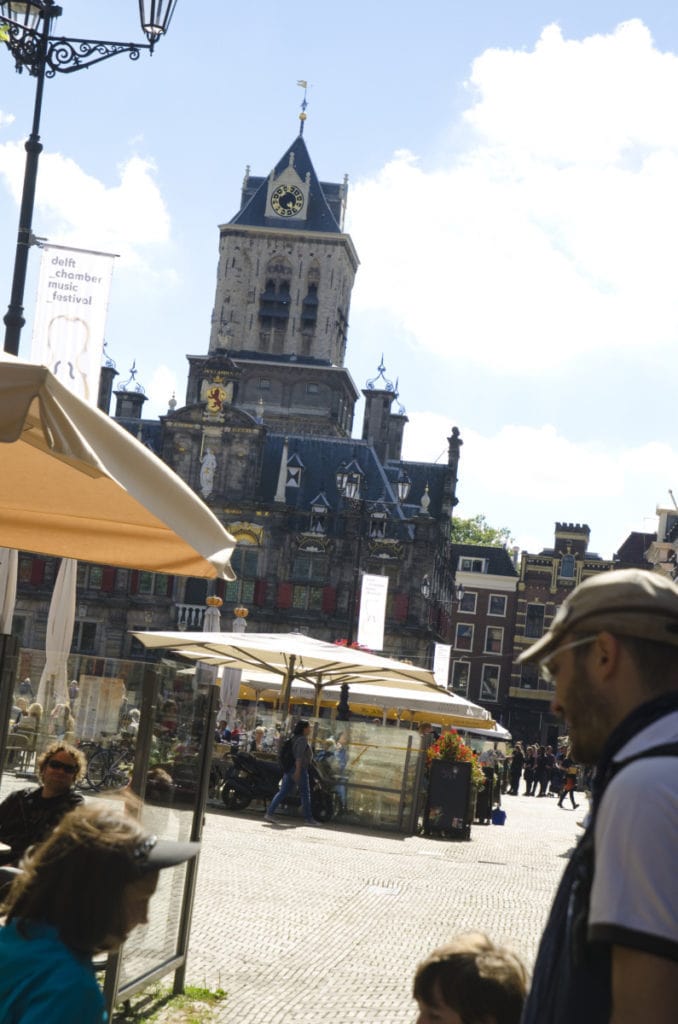 Across the square is the Town Hall (Raedhuijs), where Vermeer was officially betrothed to Catherine Bolnes. 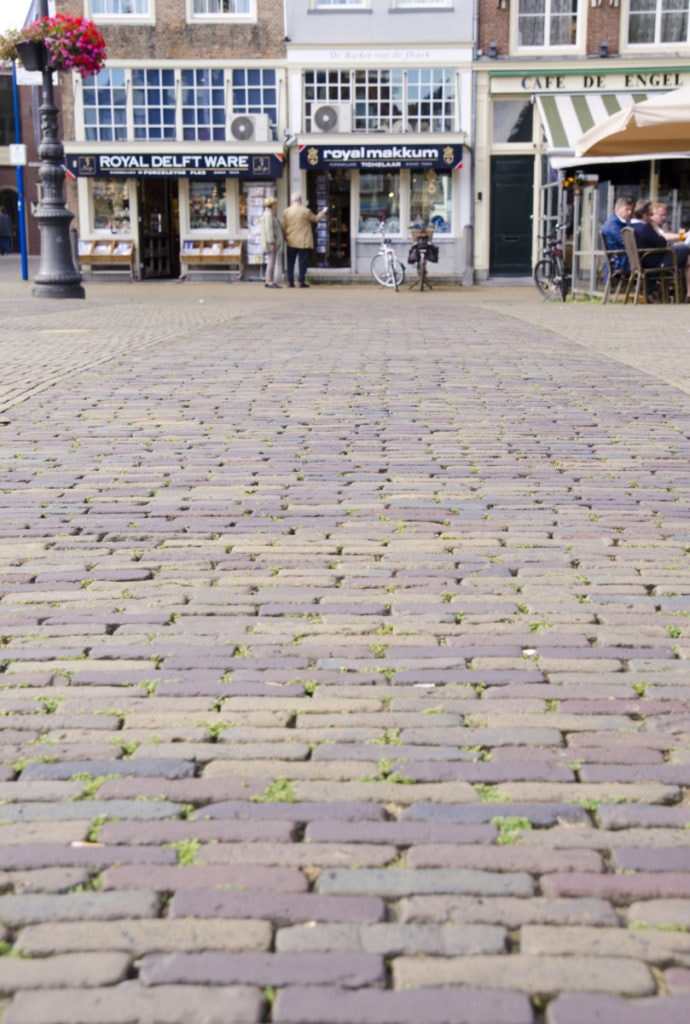 I couldn’t resist snapping a photo of the brickwork in the Market Square (Grote Markt), which reminded me very much of a Vermeer painting. 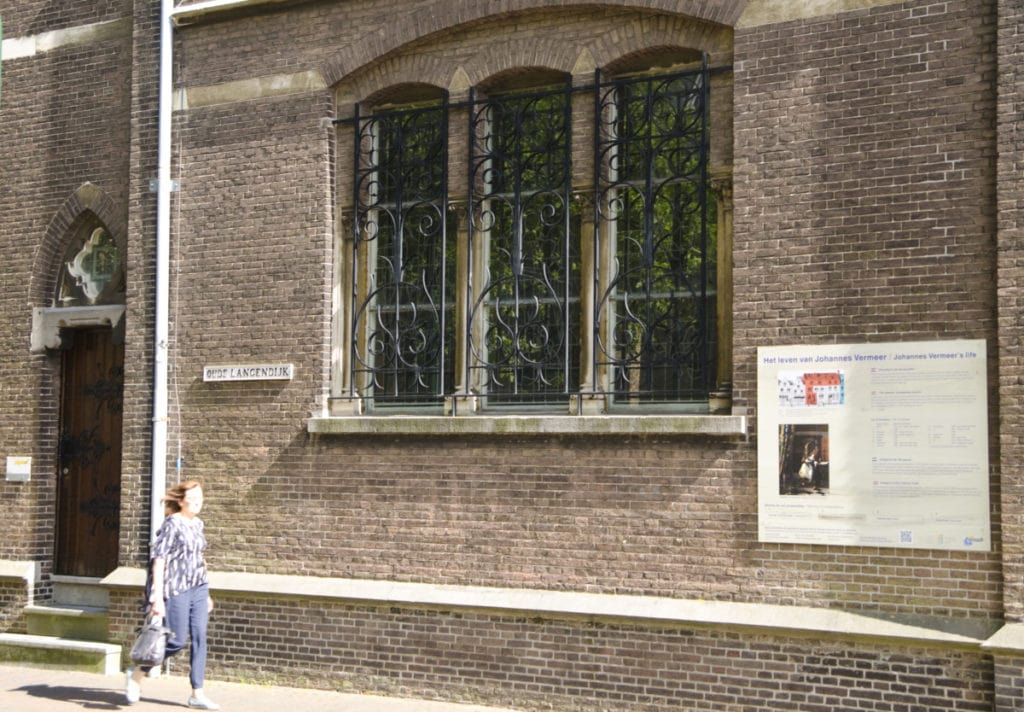 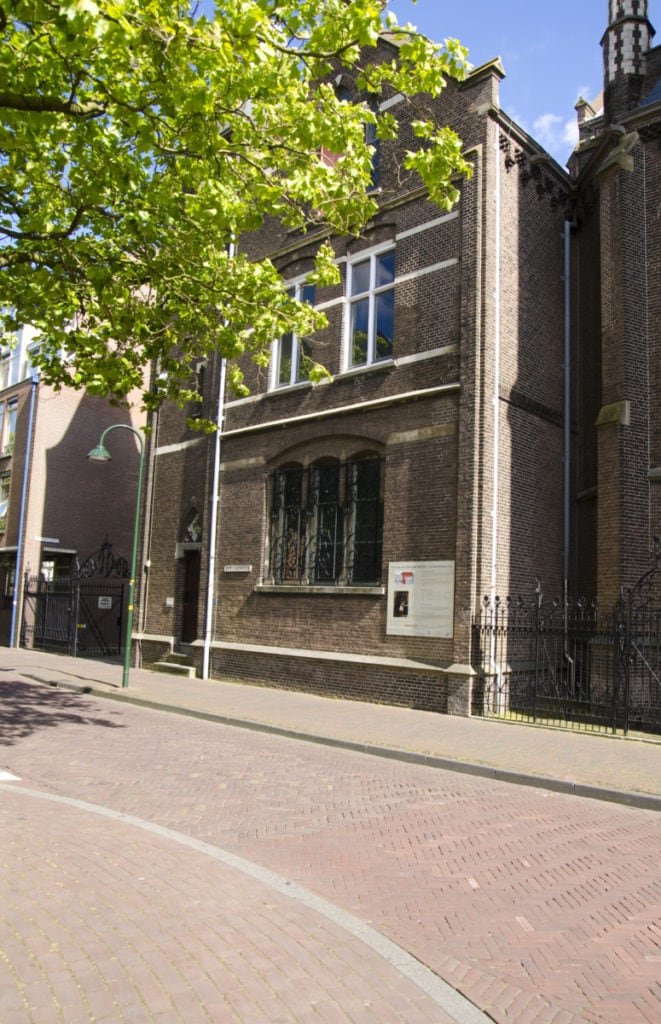 To the right of the New Church (Nieuwe Kerk) is the Catholic Maria van Jesse Church. The Catholic, Lutheran, and Baptist religions had been forbidden during the Protestant Reformation. So in Vermeer’s time, the church was clandestine and housed in the attic of these three houses. Vermeer converted to Catholicism in order to marry Catherine Bolnes, and moved into his mother-in-law’s house next door to the Jesuits. He and his wife had 15 children here.

One place we regretted not visiting is the location for the View of Delft. It has been pinpointed on the modern Hooikade, to the south of the historic center. “Historians concur that the artist worked from the second story of an inn that has been long since torn down.” -from http://www.essentialvermeer.com

However, as in the case of The Little Street, the modern landscape bears little resemblance to Vermeer’s painting. Here again, it is believed that the artist took significant liberties in the depiction of this cityscape. The painting shows no evidence of the destruction caused by the Delft Thunderclap (gunpowder explosion) just 6 years earlier. What was a busy harbour appears in the artwork as a quiet and peaceful respite. Buildings are misplaced, and the whole scene seems much closer than it is in reality. We can concur that in this, as in his other artworks, Vermeer’s goal was not merely copying what he saw with his eyes, but rather using his sensations in order to create a new and idealised reality. Perhaps it is this vision that captivates us when we look at his work. Perhaps it is this that led Marcel Proust to claim,

Ever since I saw the View of Delft in the museum in The Hague, I have known that I had seen the most beautiful painting in the world. 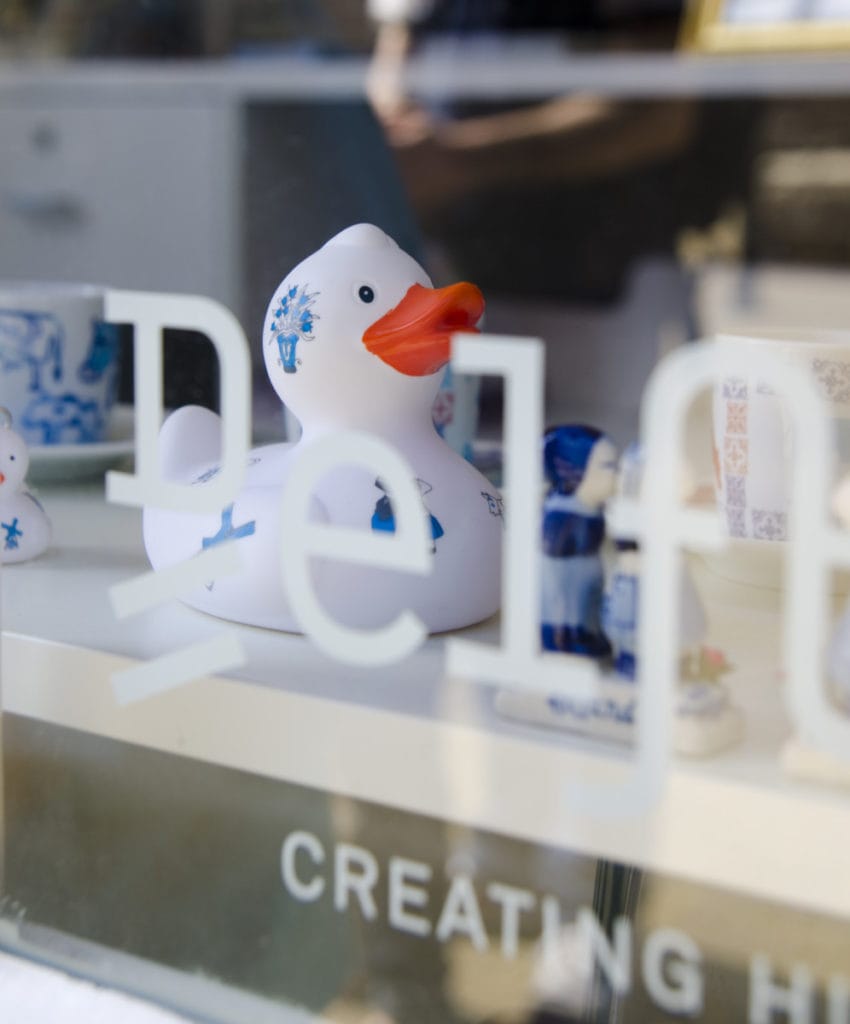 The verdict: Visit Delft! I highly recommend this as a starting point to discovering Vermeer. If possible, combine it with a trip to Den Haag’s Maurithuis or Amsterdam’s Rijksmuseum to see some of the Masterworks in person. I was a little hesitant to bring children along for this trip, but apparently those fears were unfounded. They have both been asking when we can go back to Delft!

Tip: Google Arts & Culture in collaboration with the Maurtishuis has  created a virtual exhibition of Vermeer’s complete works. Visit the Vermeer Project to learn more. 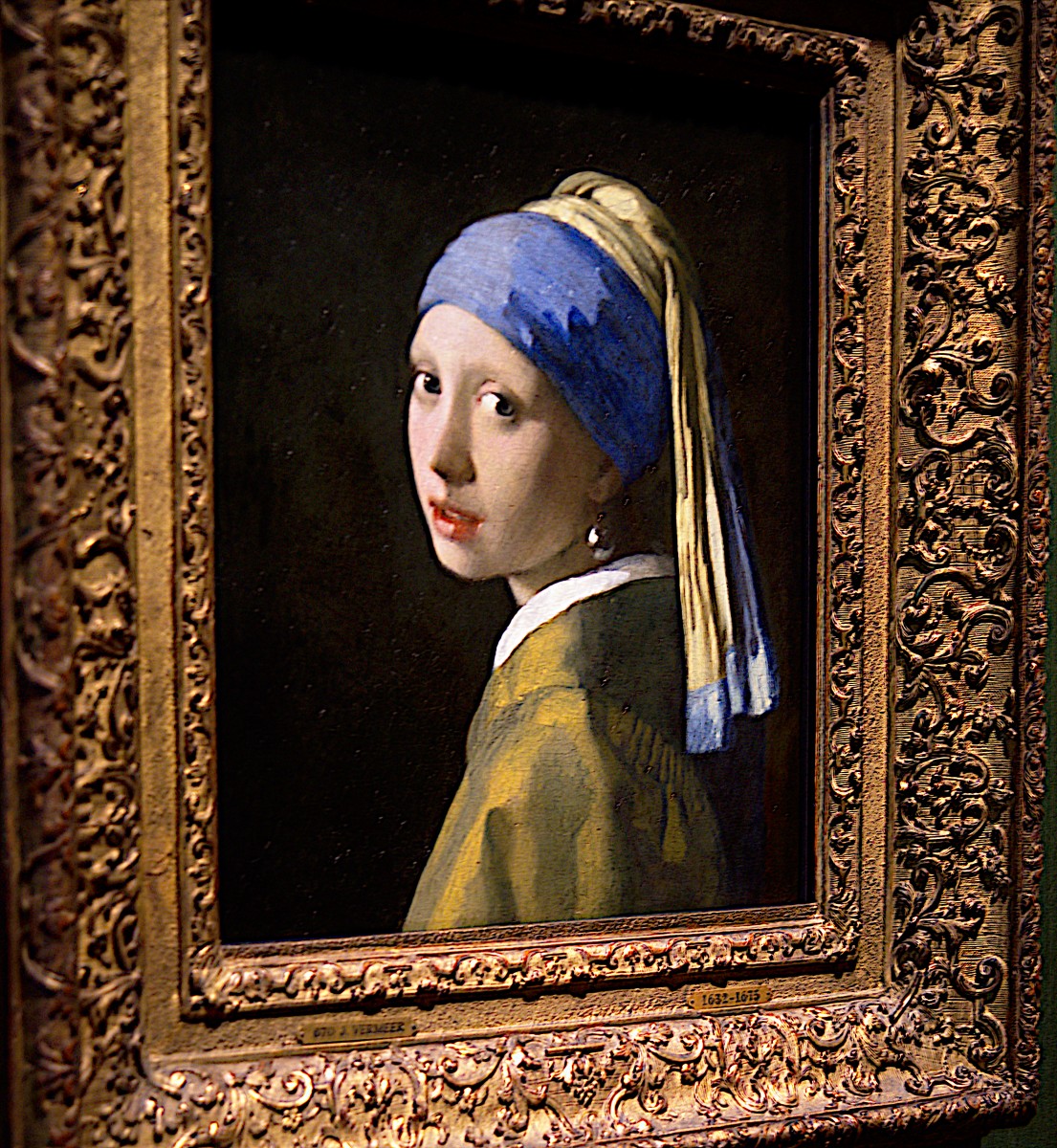 I’ll confess. I visited the Mauritshuis with one objective: to see Johannes Vermeer‘s Girl with a Pearl Earring. Following my visit to […]

5 thoughts on “A Visit to Delft, Birthplace of Johannes Vermeer”

The artwork, tutorials, and images contained on this site, unless otherwise noted, are the property of R. Palesca. If you would like to use or reproduce them in any way, you must include a quote and/or image credit and hyperlink to rpalesca.com. Images may not be edited or used for commercial gain.